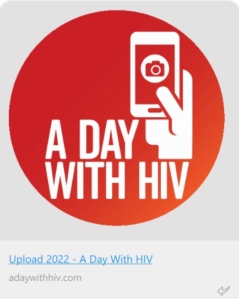 HIV Day: selfies as a way to fight stigma

HIV Day is an annual event during which people who live with an open face “share part of their day” by posting selfies in an online gallery.

This is 24 hours in the lives of people who are HIV positive. The main goal is to break the stigma. And to give hope and support to those who have only recently learned about their diagnosis and are in the process of acceptance.

Happy faces in photographs, ordinary or interesting life – the same as everyone else. And looking at people with HIV from all over the world, so different, unusual, beautiful and original, you are once again convinced that HIV is definitely not the end of the world.

Just live with HIV, just be happy and healthy, just do what you love. And remember that you are not alone!

You can see photos of other people and send your own on the Day with HIV page. Or check out the adaywithhiv hashtag.

Upload your photo and caption here to become part of our online gallery. Select high-res gallery photos will appear in the next issue of POSITIVELY AWARE, the HIV treatment magazine. Four print quality high-res images will be chosen for different versions of the cover. You can also email your photo and caption to photos@adaywithhiv.com to be included in the online gallery.

You can also email your photo and caption to photos@adaywithhiv.com

On September 5-6, we conducted the third and the last study visit to Helsinki (Finland) within the project “Exchange best practices and experiences working with refugees in the Baltics,” supported by the Põhjamaade Ministrite Nõukogu esindus Eestis.

We met in the Positiveset ry office (8 representatives of EHPV (Tallinn, Estonia), 4 of AGIHAS (Riga, Latvia), and 4 of Positiviset ry (Helsinki, Finland)). 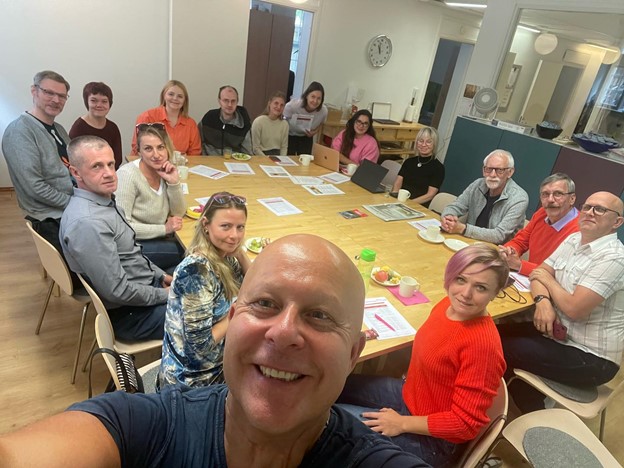 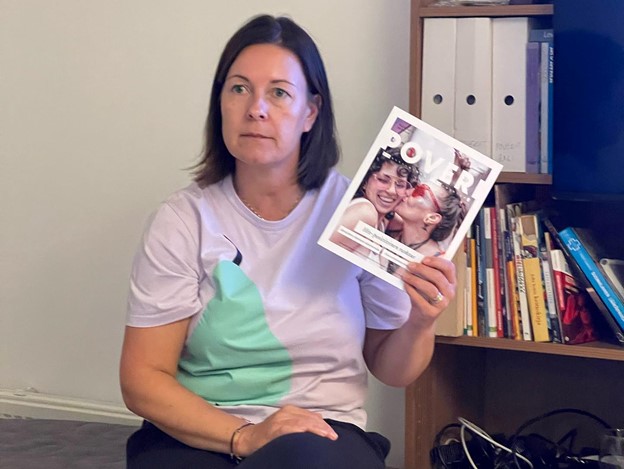 The next day we discussed further cooperation of AGIHAS, EHPV, and Positiveset ry. Firstly, Alla Zakharchuk presented the EHPV experience of developing a partnership with the National Institute for Health Development, national and local government to represent and protect the rights and interests of the refugees affected by socially valuable diseases. Next, participants from AGIHAS and Positiviset ry talked about their experiences. Then, we discussed developing a partnership to implement the Paris declaration “Fast-track cities: ending the AIDS epidemic” – cities should achieve the 95–95–95 targets by 2030. As a result, the participants agreed to work on this issue to find opportunities and resources to implement the Paris declaration. Finally, Yuliya Raskevich from EHPV presented the idea of ​​creating the Baltic hub. It will be a coordination center providing services and support to refugees from Ukraine (HIV+, LGBT) and other vulnerable groups. The participants decided to support the idea of creating the Baltic hub with the subsequent signing of a memorandum of cooperation between AGIHAS, EHPV, and Positiveset ry. At the end of the meeting, all participants gave feedback on the project and study visits, noting its actuality and importance. 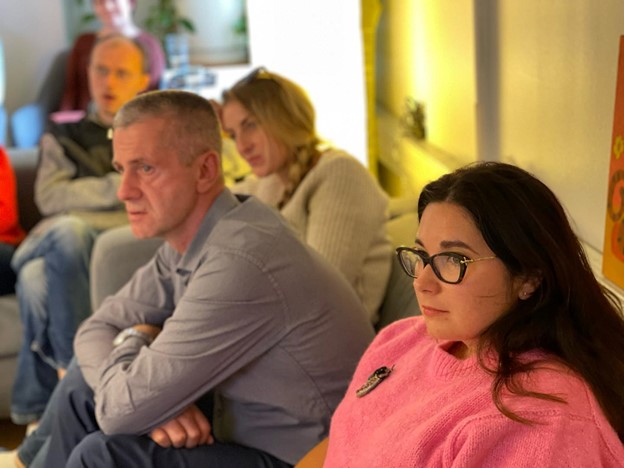 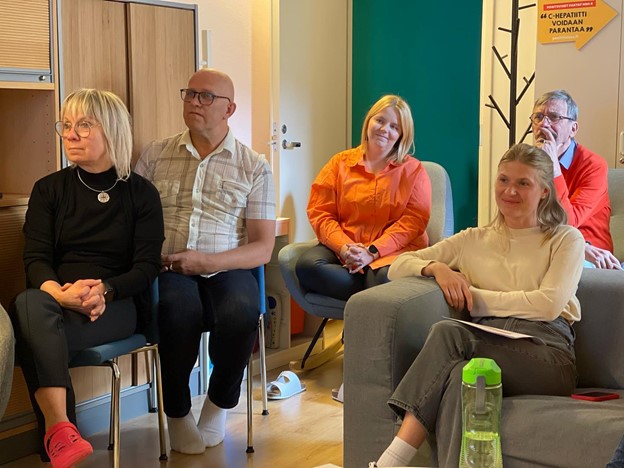 Our cooperation does not end with the project but continues with the Baltic hub that will unite
the efforts of our organizations working with refugees affected by socially valuable diseases. 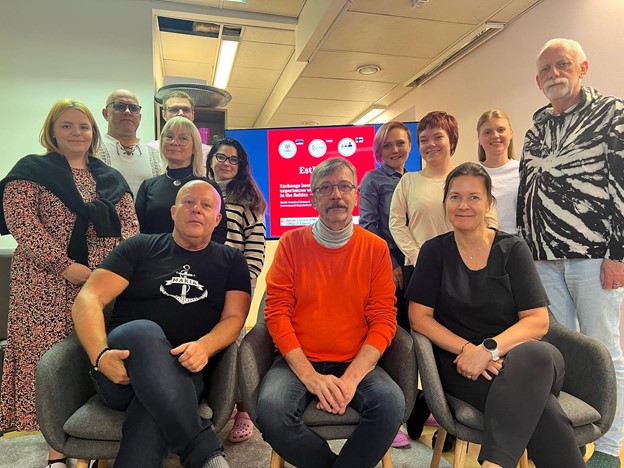 Over the years, a total of 10,477 people have been diagnosed with the HIV virus in Estonia. 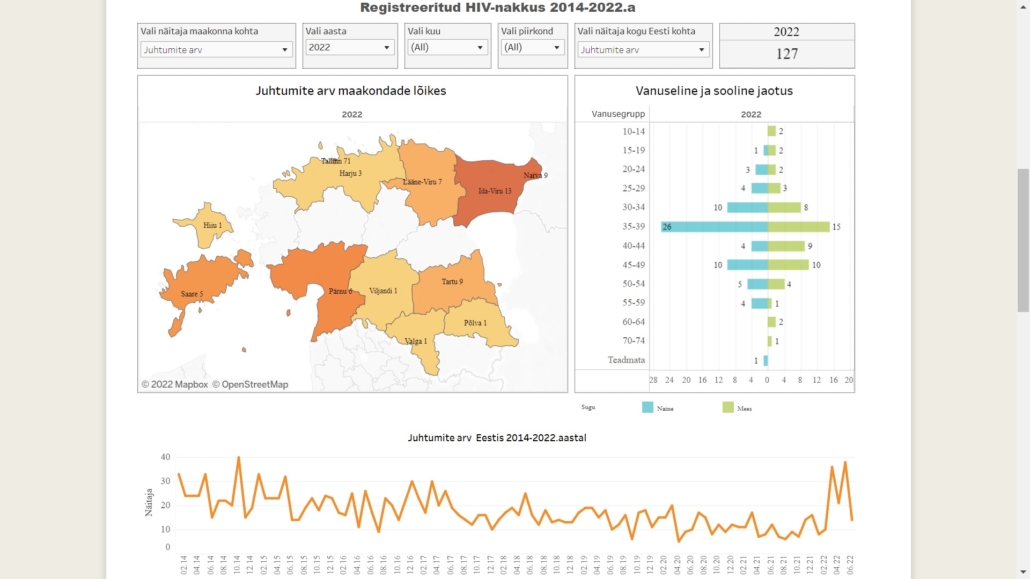 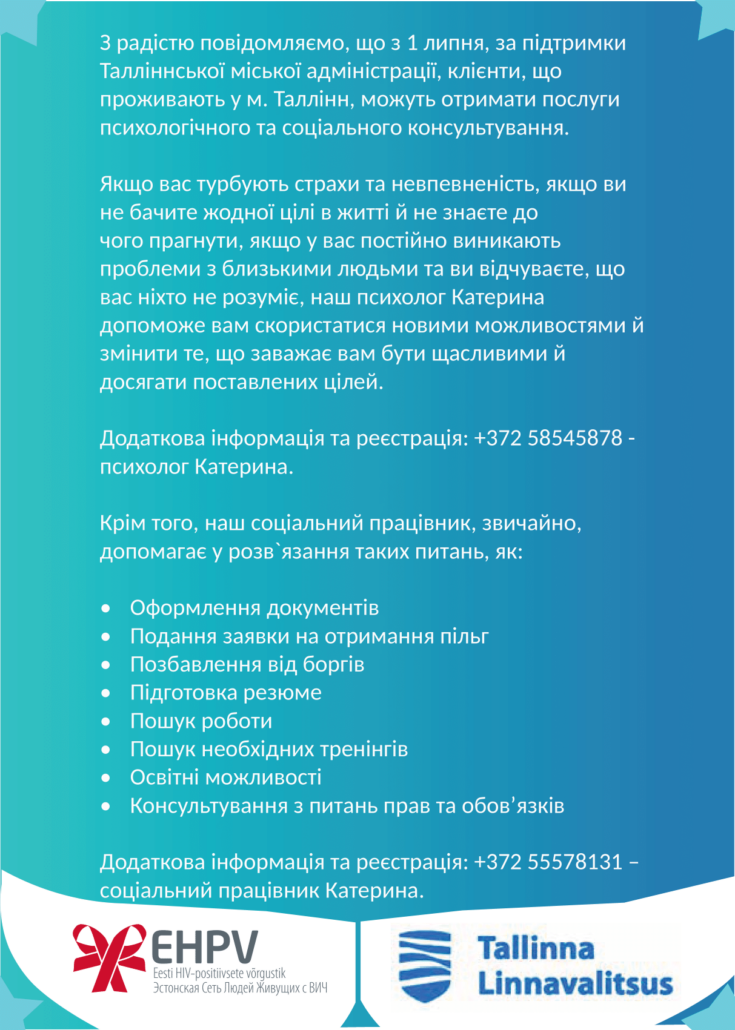 CONGRATULATIONS ON THE DAY OF RESTORATION OF INDEPENDENCE OF Estonia!

https://ehpv.ee/wp-content/uploads/2018/11/ehpv_logo_en.jpg 0 0 Vassili Skripkin https://ehpv.ee/wp-content/uploads/2018/11/ehpv_logo_en.jpg Vassili Skripkin2022-08-19 19:50:092022-08-19 19:50:09CONGRATULATIONS ON THE DAY OF RESTORATION OF INDEPENDENCE OF Estonia!
International AIDS Conference AIDS 2022 was held in Montreal from July 29 to August 2. All important HIV-related studies were presented during the conference sessions.
We have collected the key abstracts that were presented at AIDS 2022, according to our team.
The guide outlines a public health response to HIV, viral hepatitis and sexually transmitted infections (STIs) for 5 key populations (men who have sex with men, trans and gender diverse people, sex workers, people who inject drugs and people in prisons and other closed settings).
A summary of the guidelines is provided in the policy brief.
70% of all new HIV infections globally and 94% of new infections outside sub-Saharan Africa are among key populations — gay men and other men who have sex with men, transgender people, sex workers and their clients, people who inject drugs and their sexual partners.
In EECA, 22% of all new infections are among gay, bisexual and other men who have sex with men, and 0.8% are among trans*  women.
During the conference, several critical announcements were made and papers published that could change our view of pre-exposure prophylaxis for HIV (PrEP).
This document includes sections on prescribing and monitoring the drug and also provides data on all the studies that had been conducted previously. This guideline will be used as a basis for national guidelines and recommendations.
Cabotegravir (CAB) + rilpivirine (RPV) long-acting (LA) injections every 2 months for the treatment of HIV infection are an alternative to daily oral antiretroviral therapy (ART). A study in Germany showed the main reasons why patients switched to injectable HIV therapy: 92.4% — patient’s desire, 62.8% — convenience and 52.5% — pill fatigue.
An analysis of the immune response to the HIV vaccine Imbokodo confirmed the possibility of stimulating the antibody response to the HIV vaccine. This study did not show good results, because the incidence of HIV infection among those who used the vaccine was 14% lower than in subjects in the placebo group.
But this study found a single correlation risk factor for infection. Subjects with a more pronounced response to two specific components of the HIV protein coat (V1 and V2) were approximately 30% less likely to become infected with HIV.
At the conference, HIV vaccine researchers discussed current and planned work in a new direction related to the use of mRNA technologies to create HIV vaccines. In recent months, several studies have been launched using experimental mRNA vaccines.
https://ehpv.ee/wp-content/uploads/2018/11/ehpv_logo_en.jpg 0 0 Vassili Skripkin https://ehpv.ee/wp-content/uploads/2018/11/ehpv_logo_en.jpg Vassili Skripkin2022-08-16 20:43:562022-08-16 20:43:56AIDS 2022: Major Events at the Conference

On August 9-10, we conducted the second study visit to Riga (Latvia) within the project “Exchange best practices and experiences working with refugees in the Baltics,” supported by the Nordic Council of Ministers’ Office in Estonia.

We met in the LGBT house in Riga (3 representatives of EHPV (Tallinn, Estonia), 2 of Positiviset ry (Helsinki, Finland), and 4 of AGIHAS (Riga, Latvia)). 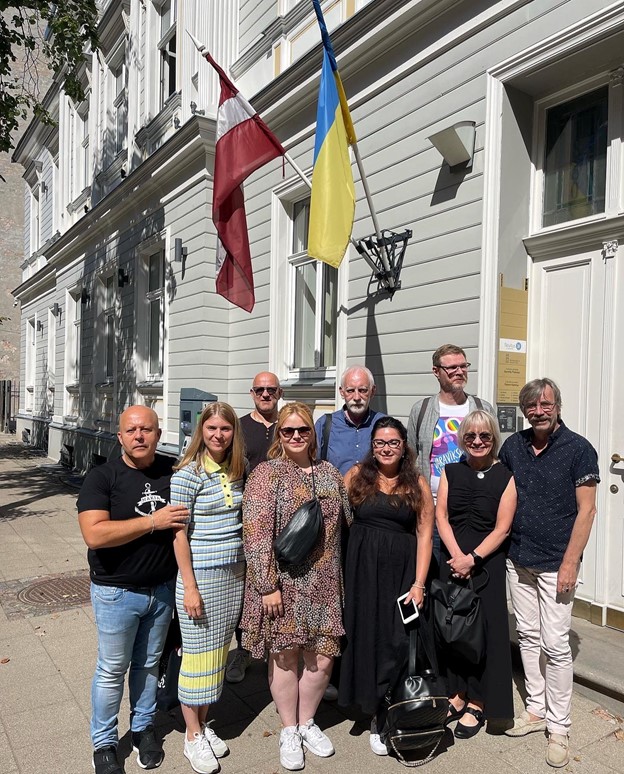 On the first study visit day, Andris Veikenieks, AGIHAS Chairman of the Board, with colleagues presented their activities. Special attention they paid to the branch of work with refugees. AGIHAS adherence consultants Ivars Līdaciņš and Māra Veselova shared their experience working with refugees online.

The next day we conducted a mini-conference to discuss and share experiences working with refugees in our countries. 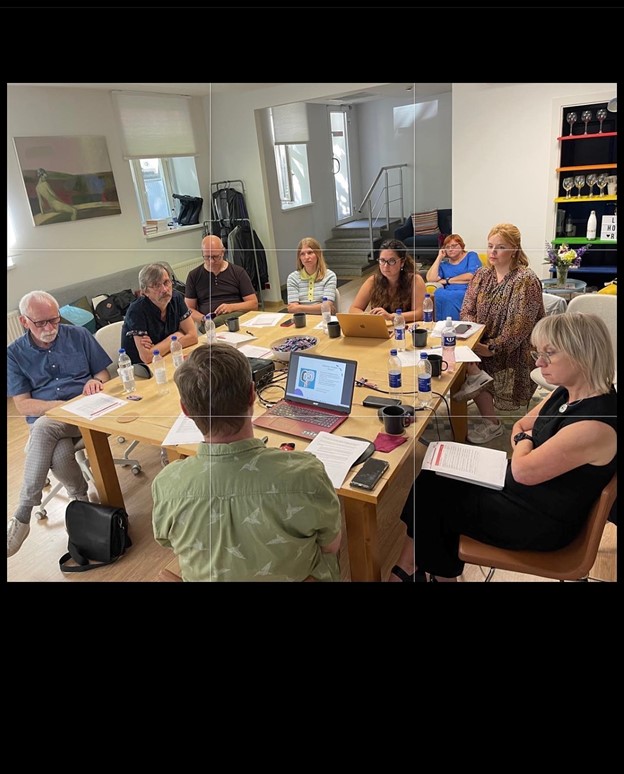 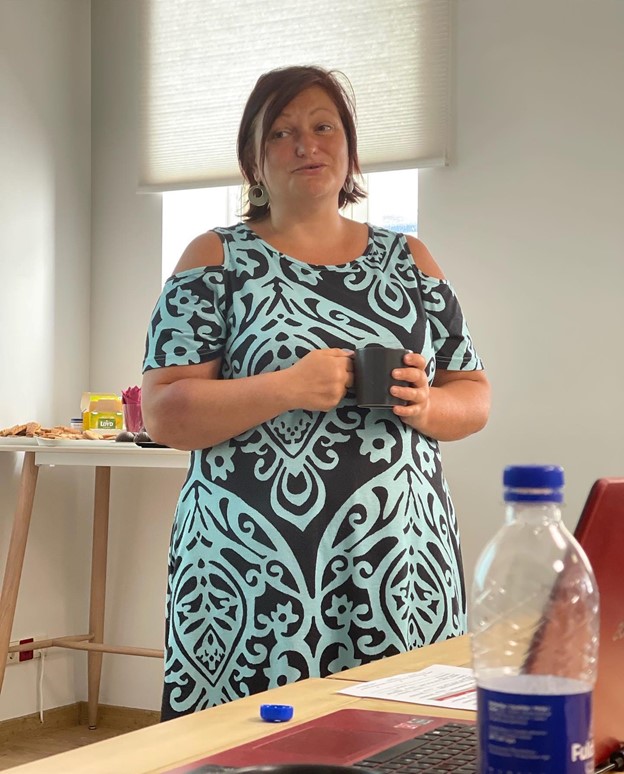 At the end of the meeting, Yuliya Raskevich and Latsin Alijev, EHPV Chairman of the board, presented the idea of creating the Baltic hub. It will be a coordination center providing services and support to refugees from Ukraine (HIV+, LGBT) and other vulnerable groups that will unite the efforts of our organizations working with refugees affected by socially valuable diseases. 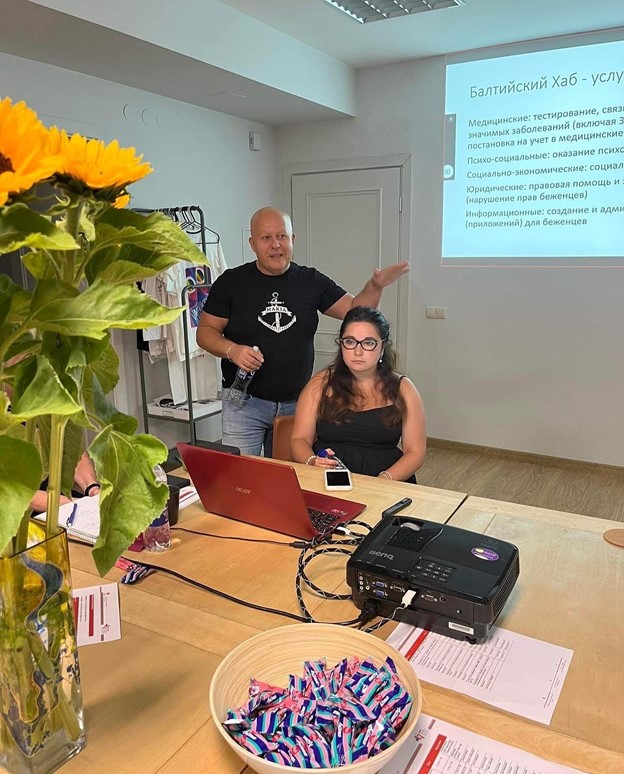 During the last study visit to Positiviset ry (Helsinki, Finland), we will learn about Positiviset ry activities and their experience working with refugees and continue to discuss our future cooperation.

Over the last two years, the multiple and overlapping crises that have rocked the world have had a devastating impact on people living with
and affected by HIV, and they have knocked back the global response to the AIDS pandemic. The new data revealed in this report are frightening: progress has been faltering, resources have been shrinking and inequalities have been widening. Insufficient investment and action are putting all of us in danger: we face millions of AIDS-related deaths and millions of new HIV infections if we continue on our current trajectory.
Together, world leaders can end AIDS by 2030 as promised, but we need to be frank: that promise and the AIDS response are in danger. Faltering progress meant that approximately 1.5 million new HIV infections occurred last year—more than 1 million more than the global targets. In too many countries and for too many communities, we now see rising numbers of new HIV infections when we needed to see rapid declines. We can turn this around, but in this emergency, the only safe response is to be bold. We can only prevail together, worldwide.
Marked inequalities, within and between countries, are stalling progress in the HIV response, and HIV is further widening those inequalities. 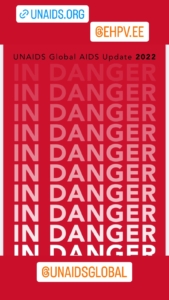 On 20-21 May, EHPV conducted the first study visit to Tallinn within the project “Exchange best practices and experiences working with refugees in the Baltics,” supported by the Nordic Council of Ministers´ Office in Estonia. 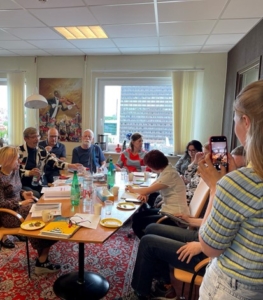 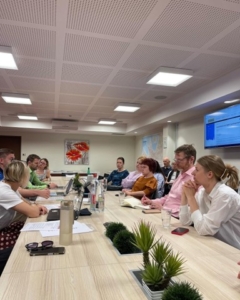 Then, Ekaterina Smirnova, the coordinator of EHPV psychosocial projects, organized a workshop working with refugees affected by socially valuable diseases. As a result, the participants discussed the peculiarities of the work of social workers, peer consultants, and support persons. Next, Ekaterina Smirnova gave a lecture about psychosocial work with trauma, and EHPV psychologist Ekaterina Maslennikova demonstrated the practice exercises working with trauma. 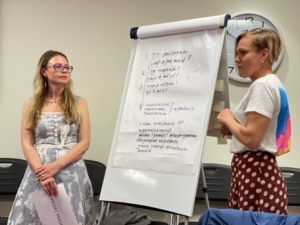 After the training, participants visited the Refugee reception center. Together with Mihhail Jakovlev, representative of the Tallinn Social Welfare and Health Care, we explored the center and learned about social services refugees can get in the center. Betina Beshkina, Deputy
Mayor of Tallinn, joined the meeting in the Refugee reception center. Betina shared her experience in creating and organizing the center and answered questions that interested the participants of the study visit. 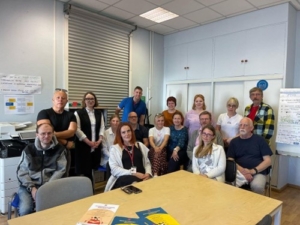 https://ehpv.ee/wp-content/uploads/2018/11/ehpv_logo_en.jpg 0 0 Vassili Skripkin https://ehpv.ee/wp-content/uploads/2018/11/ehpv_logo_en.jpg Vassili Skripkin2022-07-04 11:26:222022-07-04 12:08:17Project “Exchange best practices and experiences working with refugees in the Baltics"
Scroll to top
This website uses cookies to improve your experience. We'll assume you're ok with this, but you can opt-out if you wish.AcceptReject Read More
Privacy & Cookies Policy